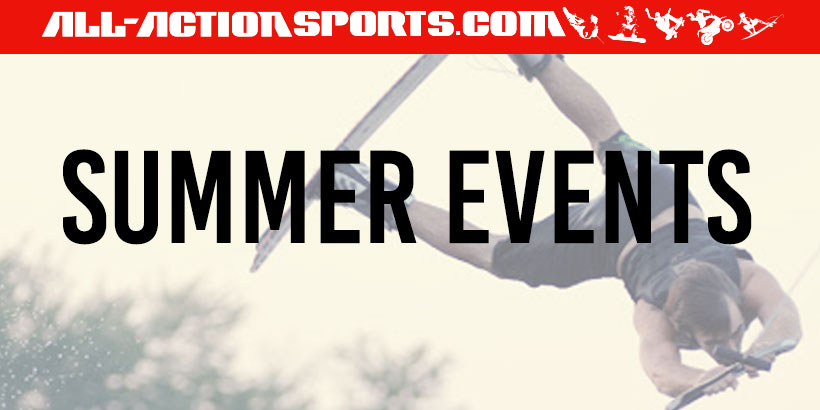 MID WEEK WAKE UP SERIES 2011
Every Wednesday, all summer long! In its fifth year. The M-W-W-U is a destination for families and enthusiasts of water sports from throughout the Chicagoland, Southern Wisconsin and Northwest Indiana area to convene and ride behind the best tow boats on water and ride the best gear available in the water sports/wake disciplines for free courtesy of our sponsors and partners. We launch several boats with highly experienced operators and coaches, We outfit the riders with demo gear on the spot and riders of all ages and ability are provided a free pull and lesson.

It is not uncommon for us to have 300-600 people each week and 100+ riders participate on a given Wed. to enjoy the Watersports lifestyle. Never rode before? Not a problem. Comprehensive beginner/intermediate instruction on site as well for free. Starting with fundamentals on land and then by boat all but guaranteeing a successful first try! This all happens on the Fox River at The Broken that provides a great backdrop of music, delicious menu and comfortable surroundings for all with ample parking for vehicles and boats. We also play host to action sports film releases, pro clinic tours and host live entertainment throughout the series. This past season you saw some of the top athletes in the sport and region visit as we moved through the season with big trick and big crash demos at dusk! Mother nature shut us down with a flooded river for a couple weeks but we came back strong! Our season finale saw a huge crowd with the AAS team riders hitting the Monster Kicker Mitsubishi Car Jump in our final Session along with streetbike stunt riders in the lot! An epic way to wrap the season! The 2011 series will be epic!

ANNUAL RIVER GAMES 2009 and 2010
Annual Heritage Harbor RIVER GAMES event. Sunny, skies and pressed out water! As the sun got high in the sky, a steady queue of riders took advantage of the demo gear and free instruction aboard several MasterCraft boats launched for the clinics including riders ranging in age from 8 to 60 (I am guessing). As the day progressed more boats launched and folks enjoyed grilled favorites, soft drinks and beer provided by Crawdad’s bar and grill, played volleyball and bags while the DJ spun a fine set of late summer fun cuts. As we moved toward sundown the sky popped with color as a team of jumpers from Skydive Chicago descended on the harbor trailing smoke landing among the crowd that had assembled to kick off the not so mini “Air and Water” show(www.skydivechicago.com). The skydivers bundled their chutes as a procession of thrilling barefoot, ski, wake surf and wakeboard athletes began their shoreline passes thrilling the crowd as the MC called the big tricks and crashes to wrap up the day.

AAS REDBULL HIGHRISE CHICAGO VENETIAN NIGHT
Lightning Man Promotions Ltd. and it’s subsidiary www.all-actionsports.com brought together the converging worlds of extreme FMX and wakeboarding along with Red Bull and MasterCraft during the Red Bull High Rise event in Grant Park Chicago where Ronnie Renner broke his world vertical jump record with a final jump of 63’5” INCREDIBLE! We then brought this Red Bull premiere athlete, his lovely wife and parents aboard MasterCraft’s Premiere Pro Wakeboard Tour X-Star as a featured boat in the Venetian Night Parade along the Chicago lakefront. With AC/DC blaring on the premium stereo Renner stood triumphant on the transom doing his best Bon Scott air guitar flanked by Red Bull Wings girls as we slowly passed the 500,000 plus that assembled at the lakefront for the parade. Cameras flashed as we approached the Red Bull exclusive viewing area on the shore and the crowd cheered while the cameras rolled on this unique natural brand alignment and unique product placement.

AAS COVERAGE OF JOURNEY’S BACKYARD BBQ
AAS stepped in to support our associates at www.sandboxmarketing.com when they rolled through Chi-town with the Journeys Backyard BBQ featuring Shawn White on wheels, Metal Mulisha demos and live music. AAS provided local promotion and some other key in market resources helping to make this event a great success.